Tahbilk Winery is realising cost and climate benefits through being carboNZero

Taking care of the environment and reducing the impact of climate change is deeply important to Tahbilk Winery. One of Australia’s oldest wineries, it has produced some of the country’s most renowned vintages since it was established in 1860, and prides itself on the quality of its grapes and character of its varietals.

Tahbilk has been owned by the Purbrick family since 1925. Five generations of the family have now worked in the business, and they have a strong sense of their responsibility as guardians of the land.

It was that commitment to caring for the earth to ensure the highest quality grapes, that led them to start measuring their carbon footprint in 2008 and then go on to achieve carboNZero certification. “It’s been a long journey and initially a bit accidental”, says Hayley Purbrick, Business Improvement, Environment and Digital Manager at Tahbilk. “At the time, it looked like all organisations in Australia might need to participate in an emissions trading scheme. We also viewed it as an opportunity to see where we were at”. 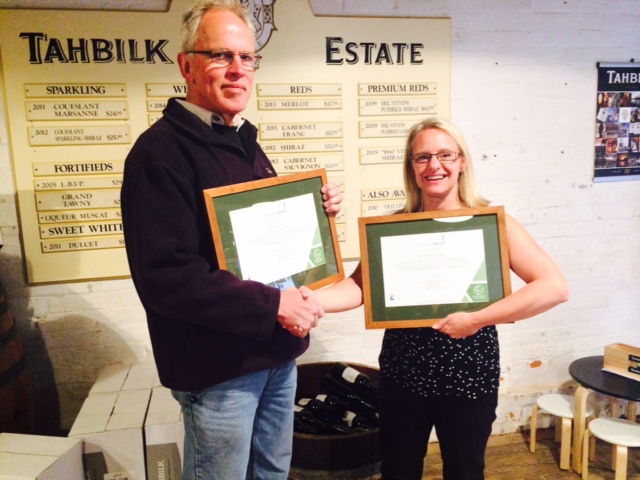 Those first measurements have been critical to the organisation realising the benefits of reducing carbon emissions. Having robust data made it easy for the winery to see which areas they could have the most impact.

Hayley says that reviewing Tahbilk’s recycling and composting identified the most significant opportunities to reduce waste. While the winery already recycled 99 per cent of their product waste, they were still sending quite a lot of material to landfill. After completing a waste audit they realised they could recycle or compost an additional 60 per cent of landfill waste, and subsequently introduced a co-mingle recycling program to cut their landfill contribution by 17 per cent.

Tahbilk were first certified carboNZero in 2014, and have realised significant environmental and financial benefits. “Anything you do for the earth saves money”, says Hayley. “Any investment we’ve made in reducing carbon emissions has wound up reducing costs”.

Increasingly, their carboNZero certification has also made them a sought-after employer of choice, as they attract team members who share their commitment to taking care of the earth. “We notice this now particularly in the under-40s age group”, says Hayley.  “They want to be involved because of our carboNZero certification and our commitment to caring for the land. Its proved a good way to keep the business relevant”.

Customers are also showing increased interest in the certification, as awareness of climate change and pollution increases. Initially Tahbilk focussed on informing their customers about their environmental projects rather than the emissions themselves, but are now considering an interactive display which helps their customers understand more about carbon and its impact. “We want to explain what carbon neutrality is and give it a visual context, to demonstrate weight and how much is going into the atmosphere so we can better communicate what we are doing”, says Hayley.

Moving into their fifth year of carboNZero certification, she is also looking at the cost and climate benefits that Tahbilk Winery can realise by approaching carbon reduction across the larger Tahbilk Group, including innovations like shared chiller units.

Hayley also hopes that the efficiencies that Tahbilk Winery has realised from going carboNZero will encourage other businesses to start their emissions reduction journey.  Her top tip for starting down the carboNZero path is to identify a champion within the organisation, who can drive the project and communicate its importance to team members and customers.

Most importantly, give it a go. “Don’t be scared to give it a go or think it’s really expensive”, says Hayley. “The initial footprint is a bit of a challenge, but once you have that the rest will just happen”.