Antarctica New Zealand: Reducing emissions at the end of the earth

Antarctica New Zealand are incredible innovators at reducing their carbon emissions. Be inspired by their creative thinking through their reduction story and think about what you can do in your organisation.

Becoming energy efficient is an opportunity for innovation and creative thinking - particularly when your organisation operates in an environment that is 3,500 kilometres off the southern tip of New Zealand and can drop to minus 45° Celsius in winter.

This is the reality for Antarctica New Zealand, which operates New Zealand’s Antarctic programme and runs Scott Base, our only Antarctic research station. The impacts of man-made climate change are obvious to those who spend time on the ice, and has motivated the impressive amount of work they have done to reduce their emissions within such an extreme environment.

“Operating in Antarctica is very energy intensive, so the team is very aware that every little bit helps,” says Ceisha Poirot, Antarctica NZ’s Acting General Manager Policy, Environment and Safety. “Protecting the environment is one of our organisation’s main values, so it just makes sense to our people that we are working to reduce our emissions.” 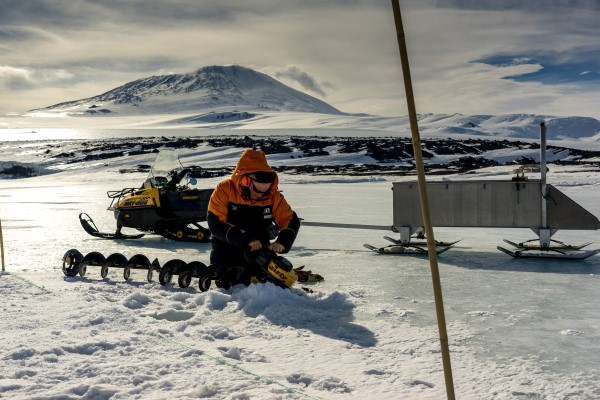 Antarctica NZ started the Toitū carbonreduce (formerly CEMARS) programme in 2009. The programme helped them to identify their emissions sources and prioritise action on those most material. In 2010, they started cutting their emissions by installing the world’s most southerly wind farm on Ross Island.  The three-turbine wind farm supplies enough renewable energy to entirely power Scott Base – and saves 463,000 litres of fuel previously used to supply electricity to Scott Base and the United States-run McMurdo Station.

“Demand response controls are used to optimise the configuration of generator use between both stations, and wind energy is consumed in the first instance by the larger McMurdo Station,” Ceisha says.

“For this reason, the renewable project commissioned and operated by Scott Base is a special one. We are sharing energy with the United States to reduce the combined emissions resulting from the operations of the two countries on Ross Island.”

The installation of the turbines themselves was also unique. New technology was developed by Meridian Energy to securely anchor the turbines into the permafrost to withstand the high winds and extreme conditions common on Ross Island.

Antarctica’s unique wind energy programme accounts for most of their 30 percent overall reduction in carbon emissions since 2010 – which saw them named as a finalist in the Climate Action (Large Organisation category) at the 2019 Enviro-Mark Solutions (rebranded to Toitū Envirocare) Awards.

The team in Antarctica is also experiencing indirect benefits from reducing their carbon emissions. Burning less fossil fuels for station activity has improved local air quality as well as lessened the health and safety risk associated with transporting and storing fuel. They are also investigating other sites on Ross Island that could be powered by renewable energy – and factoring it into the conversation on new site development on the Island.

“The reality, however, is that operating in Antarctica is not currently achievable without the use of fossil fuels,” says Ceisha. “While the built environment on Ross Island currently uses renewable energy, it is reliant on fossil fuel powered generators in periods of low wind, and as a necessary backup in power failures.”

Antarctica NZ’s two largest emission sources are Jet A1/jet kerosene and marine diesel oil which move approximately 350 people and all the required cargo to and from New Zealand and around Antarctica.

“Intercontinental flights utilise a suite of different aircraft types to move large quantities of cargo and people several times a week throughout the summer”, says Ceisha. “In addition, once a year a fuel tanker and cargo ship transport bulk fuel and supplies to Antarctica – enough to ensure the station can be self-sufficient for a period of two years if necessary. Sea ice conditions require the support of an icebreaker to clear a channel for entry, adding to the total consumed fuel required for the movement of people and cargo to and from Antarctica.” Where possible, they maximise shipping to bring cargo in and out to reduce flights.

Ninety one percent of Antarctica’s total emissions are indirect emissions related to travel and transport and therefore largely out of their control - but that hasn’t stopped the team from implementing other emissions reduction and energy saving initiatives, including installing a building management system, developing an energy management system, improving helicopter efficiency, starting an awareness campaign to change individual behaviours, and installing an energy efficient washing machine and dryer.

“Toitū Envirocare’s carbonreduce programme is helping us achieve our objectives by providing the tools and expertise to establish formal data collection and measure emissions,” Ceisha says.

“We are now working through the process of designing a new station in which energy efficiency will be a high priority. We have been working with the New Zealand Green Building Council to develop a custom Greenstar tool for sustainable building in Antarctica.”

We can’t wait to see what they do next!