This year, to mark the World Day to Combat Desertification and Drought, UN Secretary General Antonio Guterres recorded a video message calling on the world powers to stop the spread of desertification. He warned that the globe loses 24 billion tons of fertile soil a year, which represents a reduction in national domestic product of up to eight per cent. To make matters worse, this land degradation is centred in lands already vulnerable to the worst of climate change: Southern Africa, South-East Asia and central America. 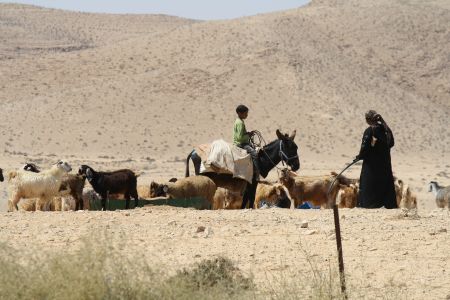 So what is desertification, and what can we do about it?

Desertification is the spread of “desert”-like conditions in arid, semi-arid and semi-humid lands, initially caused by poor land management practices and then exacerbated by climate change. The process usually starts when shrubs, bushes and foliage are removed to make room for animal grazing or intensive cultivation. This strips the land of nutrients and leaves the topsoil brittle and unproductive. The process is worsened by drought and rising temperatures; the drier land is unable to absorb sudden or heavy rain — which in turn increases soil run off and depletion.

Desertification is particularly problematic in developing areas of the world, including South Asia, central America and Africa, but also in Southern Europe, South Australia, and the lands bordering the Gobi desert. Deserts in the Sahel region of Africa, for example, which includes parts of Senegal, Nigeria, Cameroon and Sudan, have recorded a shift of sand 60 miles south since the 1950s. The Sudanese government estimates that the boundary between desert and semi-desert in their country has shifted between 50 – 200km since the 1930s. The UN believes that 12 million hectares of arable land are lost each year to land degradation, where 20 million tonnes of grain could have been grown.

Does it have other impacts?

Desertification is not just about loss of land. It also represents a loss of community, food security, and income for those who rely on that land. In Sudan, it is a key driver for families migrating from the country to urban areas in search of work. The UN predicts that 50 million people will have to leave their homes by 2020 because of desertification. This will rise to 135 million by 2045, increasing pressure on urban infrastructure, economies and water. Desertification and drought have also been linked to conflicts, ranging from Syria to Somalia, as well as public health issues, including food and water borne disease from inadequate water supplies, and respiratory disease from wind erosion and air pollution.

How does desertification contribute to climate change?

The world’s soils are our biggest carbon sink and store more carbon than our forests and atmosphere combined. Degrading land causes stored soil carbon and nitrous oxide to be released into the atmosphere. The National Academy of Sciences estimated that soils have lost 133 billion tonnes of carbon since human farming began 12,000 years ago — and contributed 10 – 20% of the total carbon emissions since the Industrial Age.

What action is being taken?

Desertification is included as part of the UN’s Sustainable Development Goals, under SDG15 (Life on Land), and June 17 marks the day that 195 nations signed the UN Convention to Combat Desertification and committed to working together to maintain and restore land productivity. Initiatives include reforestation and regeneration, alternative farming techniques, sustainable water management, enabling native sprouting tree growth and fixating the soil.

What can I do?

For some smaller local ways to help, check out the Good Life Goals, which offer solutions for how individuals and businesses can contribute to realising the UN Sustainable Development Goals. For SDG15 (Life on Land) consider the following: